Should Hindu weddings be short or traditional

At an Indian wedding in Mumbai

As soon as spring has arrived in Germany, the wedding season starts again. White clothes, beautiful churches, lots of family and lots of good food. I just experienced some of it on my short trip to India. But much was far from it. In the middle of April I was lucky enough to witness a Hindu wedding in Mumbai up close and learn more about the real life and fate of some Indian girls. 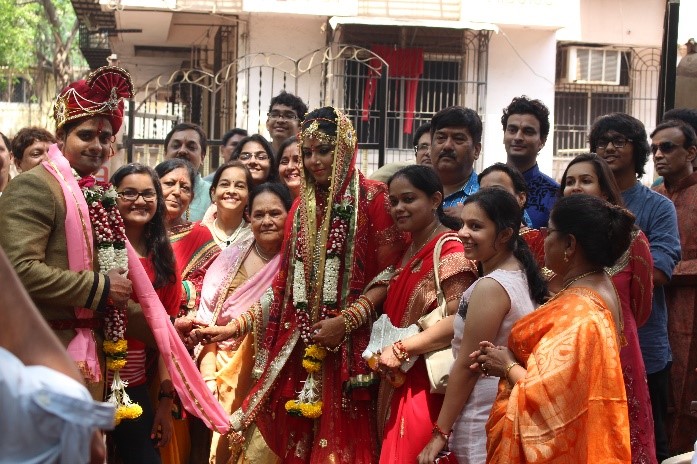 After an exciting journey with the largest passenger aircraft in the world, the Emirates A380 from Munich via Dubai to Mumbai, the heat of the metropolis hit us immediately. We approached the rest of the day rather calmly and ended it with the future couple over a traditional dinner (of course without cutlery and meat). Then we were proudly presented the bride's beautiful Indian wedding dress and the groom's equally colorful suit with turban by her personal tailor. We too were allowed to enjoy the colorful fabrics and had ourselves dressed for an Indian wedding for a total of 65 euros. 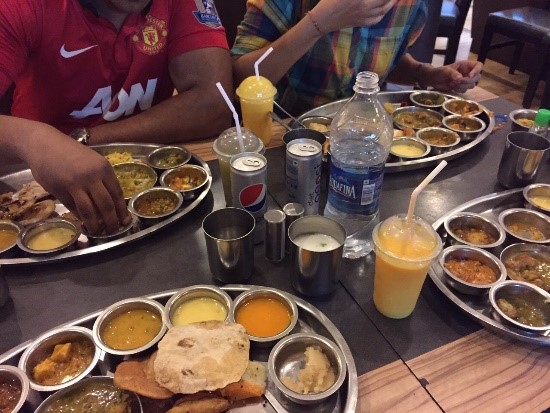 We spent the next day getting an impression of the city during a 5-hour sightseeing tour by taxi. We were more than happy to have someone with us who guided us fairly clearly through the jumble of the big city of noise, heat, dirt and the multitude of people. We were told that Mumbai is the limitless city. “Everything is possible in Mumbai”. It is not without reason that the city is also called India’s Hollywood = Bollywood. The rich and beautiful dancers and musicians of the famous films live here, next door to market vendors, fishermen and the homeless. The city is loud and at the same time life flows quietly, it is dirty and at the same time it shines through the magnificent buildings in the English style and in the blaze of colors of the clothes of Indian women.

On our third day we started with the process of the wedding and all preparations and customs regarding the upcoming Indian wedding in 3 days. All the women of the bride's family came together in her apartment to have their arms decorated with henna paint. In order to present this type of body jewelry to the groom at the wedding, the bride's entire arms and lower legs were painted with this body paint during a 2-hour procedure. Then let it dry as long as you can, because they say: The darker the color is later on the skin, the more your partner will love you. The bride wore the dried paint even in the evening, when her family invited to dance and dinner. With a DJ who played sounds that were rather strange to us, the dance floor filled up very quickly and an attempt was made to teach us stiff Europeans the delicate movements to the oriental sounds. We had already lost track of who belonged to which part of the family and who was uncle, aunt, cousin or nephew and who was just friends of the family. With such large families you can lose track of things. Nevertheless, we were warmly welcomed by everyone and even if it sometimes failed due to the language barrier, a smile always beamed at you. 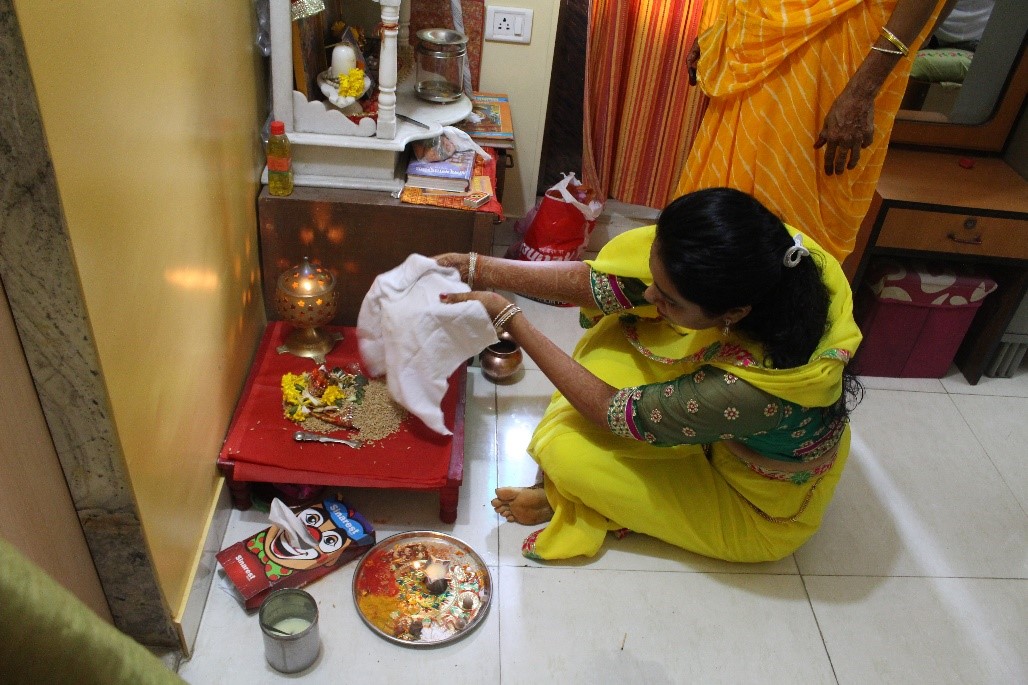 The day before the wedding

The day before the wedding was devoted entirely to the bride or groom within the respective family. We were allowed to spend this with the bride family. Since the wedding is the most important day in the life of the couple, their appearance is of course very important to them. To guarantee a beautiful, shiny complexion, the Rasam of Haldi (Ritual of Tumeric / Turmeric) was performed on this day. The medicinal plant turmeric is said to have many medicinal properties, especially for skin problems, and it gives the complexion a beautiful, golden note. The paste made from Kukuma powder, milk or oil and sandalwood powder is applied to the bride's arms, face and legs by all family members and rubbed in. This Indian wedding mask is not only intended to make it more beautiful, but also to protect the affected married couple from bad spirits. The bride was then washed off the paint by the bride's mother and her sister, as she is not allowed to leave the house, shower or eat herself on the day before the wedding. The bride is accompanied and cared for the whole day to enjoy the last few hours "in freedom". The whole process was accompanied by music with drums and rattles and the traditional chants of the women of the family. We couldn't avoid being dragged into the middle of the room from time to time and dancing in a circle to the music in rather bizarre movements.

Then it was finally there, the morning of the wedding. Early in the morning we arrived at the bride's apartment, who was already shown to us in a completely different picture. Make-up, hair done and hands and face hung with gold jewelry wherever possible. Two Indian women scurried around the bride for 3 hours and turned her into a living doll. We were also shown how to wear the traditional clothes correctly and how to put bangles over the wrists until nothing worked. Then it went straight to the new car given by the uncle for the wedding for the bride and groom and the driver made his way through the traffic jam of the streets to another part of the city, where the wedding was to take place. 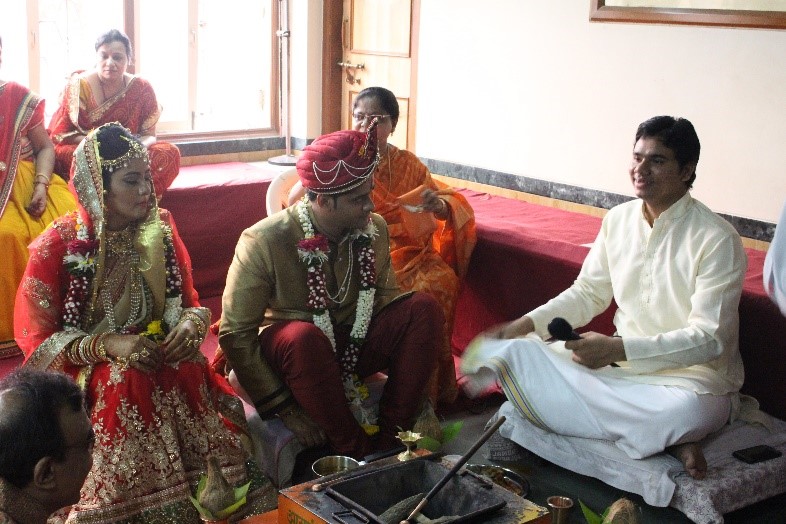 The wedding ceremony in this "temple" was somewhat reminiscent of a Christian marriage with marriage vows and the things the priest preached about. And yet everything was very different. We guests all sat on the floor and listened to what was going on in the back of the room (we were translated by nieces and cousins). Around a small fireplace, the bride and groom sat in a square, the bride's family on their right, the husband's family across from them and the priest on their left. In our "disguise" in the traditional saree, we drew the attention of the younger guests and family members in particular throughout the day. Many of them had never seen people with lighter skin and hair before. And we, too, were fascinated by the look of the women and men and couldn't stop being amazed at the traditional clothing.

After about an hour, to our astonishment, there was a small meal break during which small packages with Indian delicacies were distributed. A contemplative mass suddenly turned into lunch and a chat. After the strengthening, the rituals, such as “going around the fire” and “pouring grain into it”, continued undeterred. The families thank them for the food they have received so far and pray for their future together. After another half an hour, the newly wed couple was besieged from all sides to take photos together and to give money as the most typical wedding present. Outside, it was time for the bride to say goodbye to relatives and friends, as it is customary for the woman to move to the husband's family for the rest of her life. After a tearful goodbye, the newly married couple got into their new car and drove away.

We were happy to come out of the not so cozy sarees after this long and extremely hot morning (30 degrees outside temperature plus fireplace) and to switch to western clothes by the evening dinner, to which the husband's family invited. After we had enjoyed the traditional Indian cuisine one last time with the interplay of fresh herbs, all kinds of vegetables and various side dishes such as naan bread or rice, we fell contentedly into bed and looked back on our 5 incredibly interesting and varied days in Mumbai. We agreed that the long journey for this rather short stay was definitely worth it, as you certainly don't get the chance to experience the entire process of an Indian wedding with such deep insights too often in life.

Ayurveda is not just about staying young, healthy and beautiful forever. Rather, traditional Indian medicine focuses on detoxifying the body and optimizing mental and physical performance in every phase of life. The resulting concept is called Rasayana.

Our tip for those wanderlust: "Digital travel fair"

Experience the topic of travel in all its diversity through inspiring lectures and interesting workshops. The first digital travel fair offers the opportunity to do so on April 11th, 2021 from 10 a.m. to 6 p.m. Simply register for free.

Why not go to Sri Lanka now! A coherent hygiene and safety concept for Sri Lanka travelers makes the dream of a vacation under palm trees come true. Read here why you should consider a trip to Sri Lanka.