What is special about the Gaboon Viper

Western Gaboon viper: snake with the longest fangs in the world

(04.01.2018) There are exciting new residents in the Schönbrunn Zoo: the Western Gabon Vipers. This African snake species is special in several ways.

“The Western Gaboon viper is the heaviest venomous snake. Her muscular body weighs over ten kilograms with a length of two meters. It is also the venomous snake with the longest fangs.

The fangs can be around five centimeters long, ”explains zoo director Dagmar Schratter. Rats, mice and other rodents are on the Gabon viper's menu. The Gaboon viper shoots at its prey at over 85 km / h and slams its poison fangs into it. 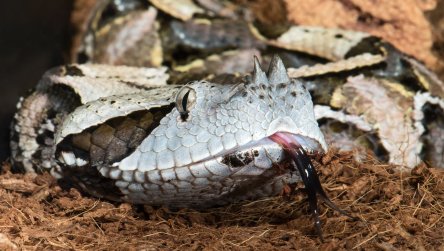 The Gabon vipers are not dangerous to their flatmates, the green tree lizards that live in the trees of the terrarium. They can also be seen for the first time in the zoo.

Schratter: “Three years ago we were the first zoo in the world to breed and we have been breeding them regularly ever since. Until now the animals have been behind the scenes.

We are pleased that we can now show them to the visitors in this new terrarium. ”Green tree lizards are around 45 cm long and are native to Kenya and Tanzania. Due to their green color, they are well adapted to life between the leaves.

They use their tail, which takes up around two thirds of their body length, to balance when climbing.

Unknown species of viper discovered in the Alps

Scientists have discovered a previously unknown species of viper in the western Italian Alps. However, the snake, which biologists from the University of Basel helped to discover, is threatened with extinction
Continue reading

“Sometimes you just have to be lucky,” says Johannes Penner, reptile expert at the Museum für Naturkunde in Berlin. By chance he and his colleagues made a surprising and rare find while working in the fields in Liberia
Continue reading