What kind of statue is that 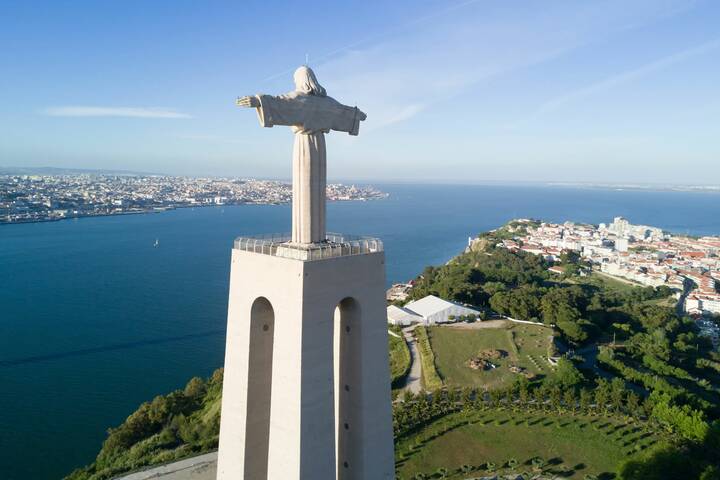 The imposing statue of Christ Cristo Rei towers high above Lisbon, in the municipality of Almada just outside, from which you have a breathtaking view of Lisbon and enjoy the metropolis from a completely different perspective.

With a height of 28 meters, the statue, visible from afar, is the seventh highest statue of Christ in the world, which looks very sublime and powerful due to its location at a height of 113 meters and a 75 meter high base.

In addition to the outstanding view that you have from the Christ statue, the place is also a worthwhile excursion destination due to its status as one of the most important pilgrimage sites on the Iberian Peninsula when you are in Lisbon and the surrounding area.

Christo Rei - a symbol of peace

Inspired by the Cristo Redentor statue in Rio de Janeiro, which the then Archbishop of Lisbon Manuel Gonçalves Cerejeira had admired on a trip to Brazil in 1934, he promoted the erection of a similar statue of Christ in Lisbon in the highest church circles in Portugal .

Initiation under the eyes of the world

After around 10 years of construction, the statue of Christ in Lisbon was inaugurated in a pompous ceremony in 1959 in the presence of high-ranking church representatives from all over the world and global media participation. Over 300,000 people attended the poignant event and witnessed a new Lisbon landmark being unveiled.

Slowly slide down the Tejo with Cristo Rei always in view

As you will see, a trip to the statue of Christ in Almada is worthwhile not only because of the view and the very special atmosphere around the statue, but also because the way is the goal with this highlight of Lisbon.

If you have half a day to spare during your visit to Lisbon, you should definitely use public transport to get to the Christ statue in Almada. Because the most beautiful and most comfortable way from downtown Lisbon to the towering Cristo Rei leads you to a ferry at the ferry pier Cais do Sodré with which you comfortably cruise on the Tagus River towards the statue of Christ and the wonderful view of the statue and the skyline of Lisbon can enjoy.

Entry to the top costs 5 euros. An elevator takes you to the 75 meter high viewpoint.