What are some common start-up dilemmas

Often wrong growth strategies and an unfavorable team composition lead to failure in start-ups. On the other hand, there are no reliable recipes, despite ongoing research. 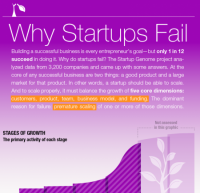 The “death” in a startup occurs when the money runs out. But what is hidden behind this always the same final stage in terms of individual causes, remains mostly hidden from the outside observer.

What is there are insights into exciting individual cases. Nobody has yet an in-depth overview of enough startups to compose a meaningful database of startup diseases. Perhaps closest to this is the team from the Startup Compass and the Startup Genome Project. First they collected a lot of information about the development of start-ups through a survey and later through their dashboard solution; It should now be over 6,000 data records (3,200 were included in the evaluation).

It should be noted: They are all tech startups and, as is typical for the US, everything is a few sizes larger: the funding collected, the reported customer numbers, the company reviews. In addition, the study only targets growth-oriented companies.

Wrong Growth as a Killer?

In addition to the attempt to gain a list of best practices for successful start-ups, a main thesis has arisen that deals with the premature death of startups. This is interesting, but also a rough and somewhat dangerous oversimplification: The study focuses on “premature scaling”, i.e. premature scaling of a startup (see infographic below).

It is about the diagnosis that many startups are artificially fueling their growth without corresponding customer demand. This means, for example, hiring additional sales people without sufficient justification. Ultimately, according to the study, these “inconsistent” startups have in common that individual areas such as team, product, finance and demand develop at different speeds and are not coordinated with one another.

Warnings instead of prescriptions

The study does not provide any recipes against startup failures and remains general in its findings - the inconsistent start-up companies work less efficiently; you write more code and the effort to acquire a customer is greater. But it is not clear: Is that a cause or an effect? Aren't there very individual reasons that cause failure in individual cases? Perhaps the well-known Tolstoy quote can be used here in an adapted manner:

All successful startups are similar to one another; but every failing startup fails in its own special way.

In this respect: You will not find any really illuminating findings here. The recently published book The Founder's Dilemmas (affiliate link), in which the author analyzes frequent founding mistakes such as incorrect team compositions, cannot guarantee anyone's success either. However, if these results are used to raise awareness, they make clear the pitfalls lurking in setting up a start-up company and provide alarm signals that help to identify undesirable developments earlier.