What are the disadvantages of standing desks

Working while standing: how healthy is it really?

Constant sitting is poison for the body. The antidote is: working while standing. Standing takes the strain off your back and promotes your health. American researchers have recently even been able to prove that standing desks can help with weight loss. And yet: doubts about the panacea theory are in order. Is it ultimately even more unhealthy to work standing up than sitting down? 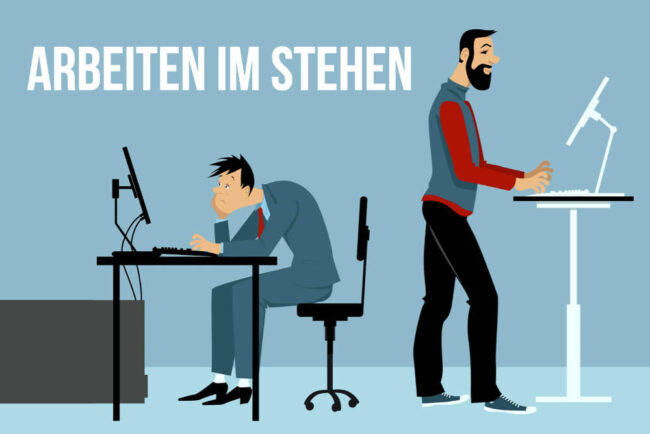 Working while standing: why?

Work makes you sick. Ok, that's admittedly pointed and also formulated provocatively. But it is not too far from reality. Employees are reporting sick more and more often and are absent longer, many drag themselves to work sick and not a few are taking early retirement due to health reasons. The health reports of the health insurance companies paint a worrying picture.

Stress-related illnesses are no longer uncommon, as more and more employees are no longer able to cope with the pressure and psychological stress. But not only the psyche suffers from the working conditions, the body too. And not only in the physically demanding jobs in which the workers lift heavy loads or have to work in a stooped position.

Many health complaints are office illnesses that run through all industries and employers and from which almost everyone who spends many hours at a desk and in front of the monitor has suffered. 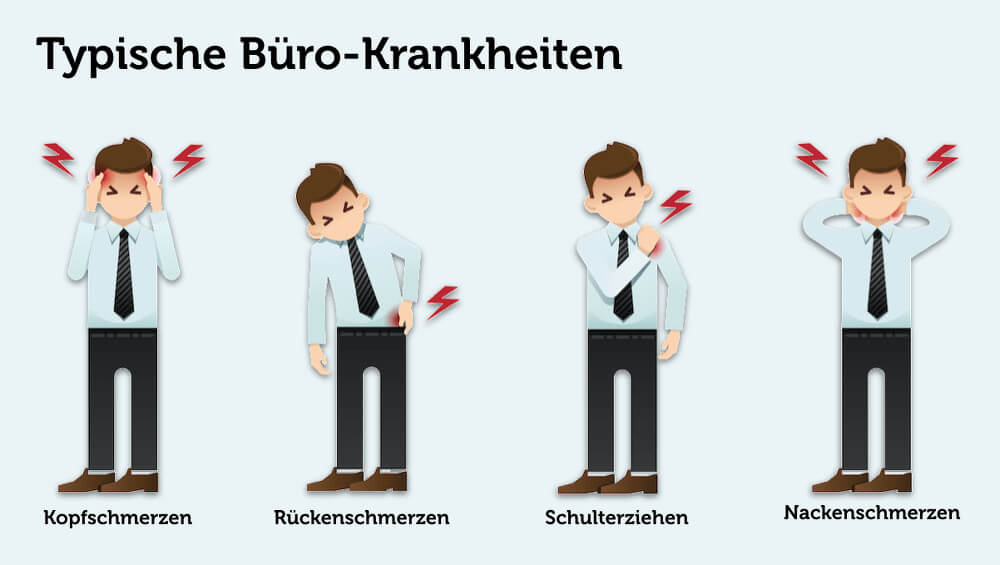 One culprit for all of these complaints has already been found: the office chair. If you sit at work most of the day, you're doing your body a disservice. Curved and rigid postures cause tension, muscle discomfort and thus back pain, perhaps the most widespread disease.

Working while standing: it helps with learning and weight loss

"Sitting is the new smoking" - More and more studies are warning of the harmful effects of sitting. Humans themselves are simply not made to sit still for hours. The body wants to be moved and also relieved. Researchers were able to show that sitting too much leads to increased cardiovascular diseases. Those who just sit all day even increase the risk of developing colon or lung cancer. To put it bluntly: Sitting can be fatal.

Moderate work while standing is not just a healthy alternative. It has other advantages and benefits as well. Standing at work helps your circulation, relieves the strain on your neck and back and even increases your intellectual abilities. “Those who stand up learn better.” This is how, for example, the result of a study by Ranjana Mehta and Mark Benden from the Texas A&M School of Public Health can be summarized. For more than half a year, the researchers observed students who both followed lectures at standing desks and later studied and studied. Result: After just six months, the test subjects had not only learned more than their seated fellow students, their cognitive abilities had also improved.

Reading and understanding, learning, memorizing facts, solving complex problems, structuring thoughts - all of this improved while standing. During their experiments, the researchers were also able to determine changes in brain activity as a result of standing. In particular, the frontal lobe was stimulated. Overall, the standing students showed a seven to 14 percent increase in memory performance.

Standing desks even help with weight loss, found a team of American cardiologists. In an article for the "European Journal of Preventive Cardiology" they calculate that the human body burns 0.15 more calories per minute than when sitting. According to this, a person who weighs 65 kilograms would lose ten kilograms in four years - if he stood six hours a day instead of sitting (and did not eat anything during that time). According to the researchers, this effect can be increased by “additional muscle movements”. "Not only does standing burn more calories, the extra muscle activity has also been linked to lower rates of heart attacks, strokes and diabetes," says study author Francisco Lopez-Jimenez of the Mayo Clinic in Rochester. “The benefits of standing could therefore go beyond weight loss.” His team had evaluated a total of 46 studies with around 1,200 participants.

Working standing up: these are the advantages

Working while standing: what are the disadvantages?

Working while standing - the ultimate savior? Not quite. According to a Canadian study led by Peter Smith from the Institute for Work and Health (IWH) in Toronto, in which the data from 7,300 workers were evaluated over a period of twelve years, it was found: 6.6 percent of workers who mainly work in the Standing working, developing heart disease. For comparison: only 2.8 percent of workers who mainly worked while sitting also developed heart disease. One possible explanation: the increased venous pressure in the legs could encourage the body to pump the blood from the legs back to the heart. Oxidative stress would be the result. And it's bad for the heart.

However, the way you stand can vary significantly. Whether you stand bent over or upright, constantly bend over or stand more or less rigidly. In addition, the scientists only recorded heart diseases, but not other possible secondary diseases.

At work: sitting or standing?

Nevertheless, the results are a bitter blow for all seated workers who had hoped for a remedy from their standing desks. But what should you do instead? “A combination of sitting, standing, and exercise should be the most beneficial to heart health while you work,” says Smith. "Employers need to get this message across to their employees, not just those who sit mostly, but also those who mostly stand."

Indeed, according to the study, the risk was for workerswho alternate between standing, sitting and walking decreased. But only for men. Even this combination didn't work for women. Smith suspects that this is justified by the fact that women work particularly often as nurses or teachers - jobs with high (psychological) stress potential. His advice: You have to think beyond physical health. The perfect combination: Combine physical activity with mental stress relief. It's not that easy, though. Anyone who finds the magic formula would definitely have deserved a prize.

Movement at work: it helps!

Permanent standing is also not as healthy as expected. Of course, that doesn't mean that sitting is a boon again. Sitting remains a silent killer. How do you stay away from him? There are also findings from Canada on this. Adults therefore need 60 to 75 minutes of moderate physical activity per day if they want to compensate for the risks of an eight-hour day at a desk. The Canadian study, which appeared in "The Lancet", is based on a total of 16 studies with one million participants from around the world. This can be done, for example, by taking a quick walk or cycling. Problem from a psychological point of view: 60 minutes a day is an almost unattainable limit for many. And hopelessness can mean that many do not even try. But: if you are practically active, a few minutes a day are an improvement for you. The more exercise, the better. 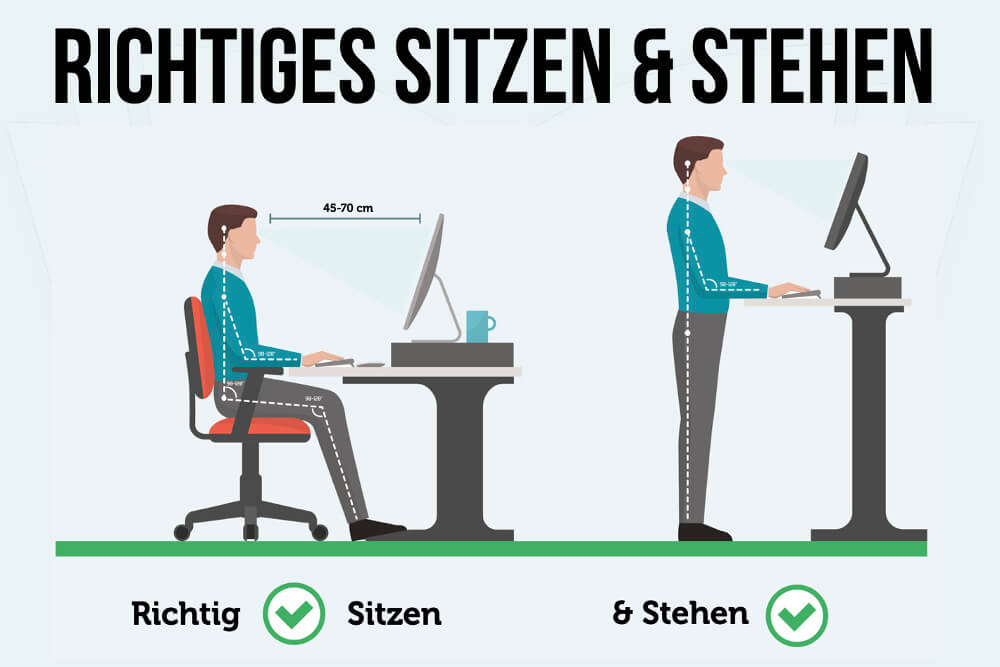 Tip: Incorporate exercise into your daily work as much as possible. This may include commuting by bike in the summer or getting off two or three stops earlier and walking the rest of the way. Make the lap around the block a regular ritual during your lunch break. Never take the elevator, but ALWAYS take the stairs. Or even put pedals under your desk in an emergency.

Working at the standing desk: You should pay attention to this!

“Then I'll just get up at work!” - It sounds extremely simple, but it can also lead to new problems. If you stand incorrectly, you don't take the strain off your back, but just shift your cramped sitting into a standing position. Bent over with a tense neck and aching shoulders. In addition, there are problems with the knees, feet and joints, which are more stressed when standing. Fortunately, there is another way and working properly while standing is not that difficult if you stick to a few basics. These tips can help you:

What other readers have read about it