New citizen or part of our bird world?

Few bird species receive as much media attention as the Egyptian goose. Dislikes and prejudices against this bird species usually play a role, but they are mostly unfounded. 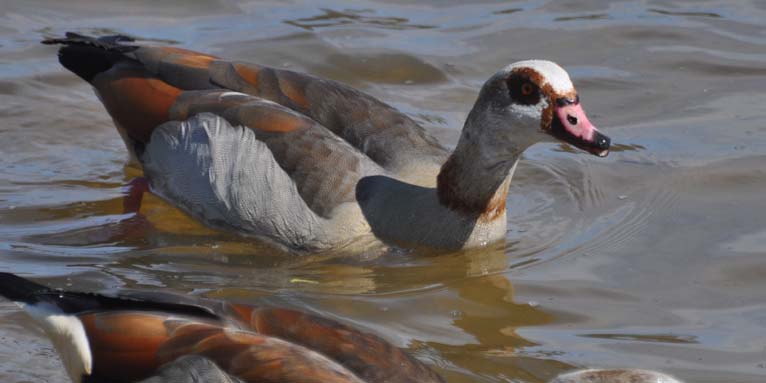 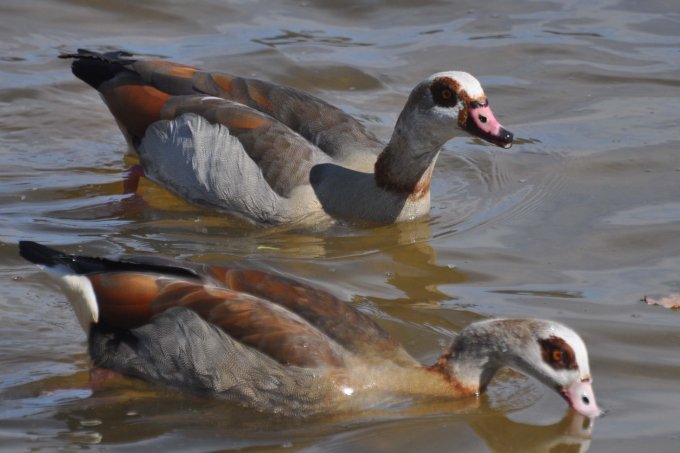 Egyptian geese are neutral, indifferent and disinterested in their behavior towards most other bird species. - Photo: NABU / Stefan Bosch

The Egyptian goose has spread rapidly in Central Europe and is always a cause for discussion. The question arises as to whether or not it can be considered part of our native bird life. The Egyptian goose is a breeding bird in Africa, its main distribution area is south of the Sahara and in the Nile valley. The African population is estimated at between 200,000 and 500,000 birds. However, there is evidence of breeding in southern Europe as early as the 17th century. Egyptian geese were often kept in parks and zoos, especially in Great Britain, from the 17th century onwards. From the end of the 18th century there were free-flying Egyptian geese, in the Netherlands since 1967.

There has been an increase in the number of buildings since the 1980s and an expansion of the area since the 1990s. From the Netherlands the settlement took place along the Rhine to the south. The first broods took place in Belgium from 1982, in North Rhine-Westphalia from 1986 and in Switzerland from 2003. In most cases, the population increased rapidly after the first attempts at breeding. The European population is estimated at over 26,000 breeding pairs, mainly in Great Britain and the Netherlands, the German population at 1,500 breeding pairs.

Egyptian geese become sexually mature at one to two years of age and breed between March and September near water in cavities in the ground, on trees or in buildings. There the female builds a nest and lays an average of 6 to 10 eggs. Egyptian geese breed once in Africa and up to three times a year in Central Europe. However, the breeding success is low because of the high losses of eggs, clutches and young birds: on average, only two young birds fledge per pair and year. The reasons for this are predators such as crows and the effects of the weather.

Egyptian geese are considered to be particularly aggressive. This behavior is explained by their origin: In Africa Egyptian geese have to defend themselves against various predators. Studies on Hessian Egyptian geese put the image of the aggressive goose into perspective: they only show aggressive behavior in certain situations and for a limited space and time - and this is completely normal and typical for geese species. Goose behavior differs significantly from the more familiar "good" behavior of ducks. We may also notice Egyptian geese more because they are larger and more vocal.

- in the case of food competition, especially feeding
- to protect nest or young birds as well
- if the individual distance from other animals is less than 30 to 50 centimeters.

Egyptian geese are not generally brushed for riot, because aggression also harbors the risks of escalation or injury and costs energy. Aggressive behavior has two stages: threaten first, then fight. Threatening behavior includes raising the head, fluffing plumage, opening the beak, shouting loudly, opening wings and brief pursuits. If the threatening gestures are unsuccessful, the Egyptian goose goes into combat, which includes biting, chopping and diving. 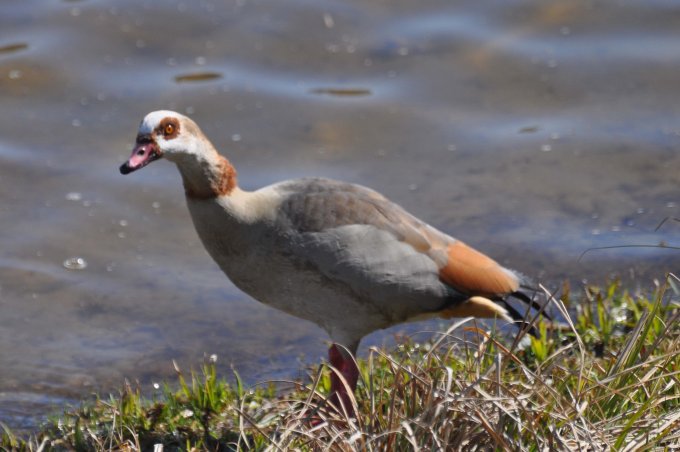 Egyptian geese were naturalized by us humans in Central Europe and we offer them living conditions in many places that meet their needs very much. - Photo: NABU / Stefan Bosch

Egyptian geese are neutral, indifferent and disinterested in their behavior towards most other bird species. Exceptions are the already mentioned food competition, short distance or defense of the offspring. This means that Egyptian geese hardly differ from other water bird species such as the mute swan, coot or great crested grebe, which show similar behavioral patterns. Apparently there is a “pecking order” on bodies of water, which is determined by body size. Here the Egyptian goose joins the larger species. Attacks against mallards in particular are observed against smaller species. Coats are not attacked. In individual cases, other, mostly smaller, water birds may be killed. Conversely, Egyptian geese suffer attacks from the larger greylag goose.

Couples with juveniles are more attentive, but much less aggressive, and if only to defend their offspring. Then the aggression is more intense, especially by the males. The most critical phase is when dune boys are led. Among the Egyptian geese themselves, aggression occurs more frequently and more intensely when young and unmated Egyptian geese riot. They are more often aggressive towards their conspecifics, but with less intensity and mostly when the individual distance is not reached or when it comes to food. Other Egyptian geese are driven away at the nest. The skirmishes among Egyptian geese do not seem to irritate or disturb other bird species.

Small body of water and lots of water birds

In addition, the aggressiveness depends on the size and location of the water, the current waterfowl density, the season and the breeding status. Urban ponds in parks or zoos usually have a small area but are home to a large number of water birds. When resting places, breeding places and food are scarce, conflicts are inevitable. Lone birds can quickly get too close and react aggressively. Egyptian geese are clearly more aggressive in urban waters, mostly towards conspecifics. In natural rivers, lakes, gravel pit waters, etc., Egyptian geese tend to be more defensive and avoid other bird species. With full-fledged boys, they seek out remote stretches of water with less potential for conflict. And by the way: Other bird species sometimes benefit from the aggressive Egyptian goose, for example by protecting neighboring lapwing and ducks from predators.

Genetic studies show that the Egyptian goose is one of the so-called demi-geese, a group of birds whose ancestors are considered to be duck-like. Egyptian geese are thus more closely related to ducks and sawaws than to geese.

Egyptian geese can exhibit problematic behaviors that may affect other bird species. "Hostile takeovers" of nest locations and forced adoptions of goats of other geese species are known. Whether this threatens the populations of rare species remains to be observed. Ornithologists assume, however, that aggressive Egyptian goose behavior has no long-term effects on the populations of other bird species. Interventions against Egyptian geese appear justified at best if threatened, rare species are affected. Displacements of other species by Egyptian geese are known only in a few cases. In Baden-Wuerttemberg there are indications that larger numbers of Egyptian geese socialize in certain areas to moult (as do other water bird species), for example in the Rhine-Neckar region and on the Upper Rhine.

Egyptian geese feed on grass, seeds, leaves, vegetables, cereal grains, sprouts and potatoes, sometimes also on worms and grasshoppers. If geese appear in larger flocks, they can cause damage to agricultural crops. So far, hardly any serious damage has been reported to the Egyptian geese.

In cities, Egyptian geese appear again and again as uninvited guests in gardens, outdoor pools or on golf courses. The reason for this is the short-cropped lawns: They represent a highly attractive offer as a grazing area on which the geese can graze plants. Long-stemmed meadows that have grown taller are avoided. In particular, feeding the birds in outdoor pools increases the attractiveness of these areas and should generally not be done. And whoever eats a lot of green leaves behind a lot of green piles, which can be an aesthetic and quantity problem, depending on how many birds are present.

There are hardly any really effective means of permanently scaring birds away (apart from tall vegetation). In some places dogs, drones or the hunting rifle were used - mostly with only short-term success. The kills, which are repeatedly requested, do not offer permanent protection from Egyptian goose visits and are not without danger in settlements. According to a study, there is evidence that hunting can have a certain effect, but does not affect the overall population. The currently granted, limited closed season from January 15 to August 31, however, does not make much sense for a species that breed all year round in this country. The mass gassing of birds practiced in other countries is also unacceptable for reasons of animal welfare.

Egyptian geese were naturalized by us humans in Central Europe and we offer them living conditions in many places that meet their needs very much. They are now established in our environment. We will have to come to terms with this increasingly common bird species and learn more about it. Prejudices are of little help here. However, further observations, studies and experience in dealing with this bird species are necessary.

The following applies to all water birds:
- Respect waterfowl! Always keep a distance of at least one meter from water birds and Egyptian geese in particular.
- Do not provoke waterfowl with hand movements, sticks, shopping bags etc. - this annoys and worries them and inevitably triggers aggressive reactions.
- Do not approach nests, breeding adult birds, or fledgling juveniles that are accompanied by adults.
- Even if it's fun: Please consistently refrain from feeding water birds near lakes, rivers, park ponds or in the open-air swimming pool!

More about the Egyptian goose