You could swim in an aquifer

Acute danger: The inhabitants of thousands of islands in the Pacific and Indian Ocean could become homeless earlier than previously thought. Because a large part of these islands will be uninhabitable before the middle of this century, as climate researchers have determined. The reason: As the sea level rises, tidal waves and floods increase - and these cause the atolls' drinking water to become too salty, according to the scientists in the journal "Science Advances".

The danger is not new: the inhabitants of many coastal areas and islands have been fighting the ever-approaching sea for years - even islands off the US east coast are acutely threatened. But the atolls and flat islands in the tropical seas are hit even harder: there the sea level is rising more than the global mean, at the same time many of these islands protrude less than two meters above the ocean.

For how much longer?

How long the inhabitants of these islands will have before they have to leave their home has been a matter of dispute. While forecasts based on sea level rise do not predict a “land under” until the end of this century, other researchers expect a serious drinking water shortage as early as 2050 due to increasingly sparse rainfall on many islands.

Curt Storlazzi from the US Geological Survey and his colleagues bring further bad news for residents of the tropical islands. For their study, they examined a previously neglected risk factor: the threat to drinking water reserves from tidal waves and repeated floods. Because the rising levels also make such events much more frequent, as the researchers explain.

When the freshwater lentil becomes too salty

The problem: the drinking water of most atolls and tropical islands comes solely from rain-fed water sources. These form thin freshwater lenses in the subsurface, which because of their lower density float on the salty groundwater of the atolls. If, however, salt water is washed into these fresh water deposits from above during flooding, the water mixes and the drinking water becomes saline. 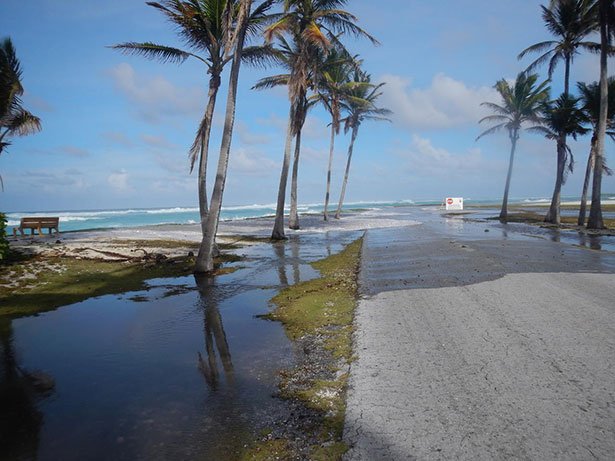 Using the example of the Marshall Islands in the South Pacific, the researchers have examined how acute this danger is for the thousands of tropical islands. For one of the islands in the Kwajalein Atoll, they determined how often floods occurred between November 2013 and May 2015 and how this affected drinking water resources. Using two models, they then calculated how this trend will continue in the future.

The result: Many atolls could become uninhabitable before the middle of this century due to a lack of drinking water - significantly earlier than previously assumed. “The tipping point at which potable water is no longer available will be reached in the very near future - within the lifetime of today's islanders,” the researchers said. According to their forecasts, many islands could reach this point as early as 2030 to 2040 with unchecked climate change.

The reason for this: Rising water levels and increased floods will cause the islands to flood so frequently that even strong, repeated rainfall will no longer be able to flush out the salt water. “The precipitation is then no longer sufficient to replenish the islands' water supplies before the storms of the next year and with them new floods begin,” explains co-author Stephen Gingerich from the USGS.

But that means: In a few years or even decades, millions of islanders could lose their homes. "Our results apply not only to the inhabited atolls of the Marshall Islands, but also to the Carolines, the Cook Islands, the Maldives, parts of the Seychelles and also the Hawaiian Islands," said Storlazzi and his colleagues. "Most of these islands have a very similar structure and morphology to the Kwajalein Atoll."

In addition, according to the researchers, their models may even have underestimated the risk. Because the Marshall Islands chosen by you as an example belong to the more high-lying islands in the Pacific. However, many other atolls do not soar above the ocean and could therefore become saline and uninhabitable even more quickly. "The timing for the tipping points presented here could therefore be too conservative," said the scientists.

Many only have the option to flee

According to the scientists, their results underscore the immediate threat that climate change poses to many island states and atolls. "Our data demonstrate that the danger is up-to-date and underline the urgency for appropriate planning and measures," say Storlazzi and his colleagues.

Because if nothing is done, many islanders will only have to flee their homes. "And that could have significant geopolitical consequences," say the researchers. The problem: technical solutions such as protective walls could protect many islands from increased flooding. But most of these measures are simply too expensive for the island states. Without help from the industrialized countries - for example through an aid fund as decided in the Paris Climate Agreement - it will hardly work. (Science Advances, 2018; doi: 10.1126 / sciadv.aap9741)