45% of which are in electrons and positrons, 45% in neutrinos, 9% in photons and 1% in gravitons. With smaller ones

more massive particles are also emitted. Black holes below about three times the mass of the Sun cannot be formed by gravitational collapse of stars. They must have been formed, if at all, under the extreme conditions of the early universe (primordial black holes).

The entropy of a black hole is through

given (Bekenstein-Hawking entropy), in which

denotes the surface of the event horizon. (In the case of the Schwarzschild metric,

.) In numerous thought experiments the validity of a generalized second law could be shown: The sum of

and the entropy of normal matter never decreases in closed systems. An open problem is the interpretation of

within the framework of a microscopic statistical theory, for example according to the Gibbs formula

is a suitable density matrix;

given macrostate of the hole are compatible. Such an interpretation should be possible in the context of quantum gravity.

is in a binary star and removes matter from the companion star, which is initially deposited in an accretion disk (accretion) and from there is accelerated into the black hole. On the basis of the observations it must be possible to rule out that such objects are spectroscopic binary stars or X-ray binary stars.

Black holes in the centers of galaxies, so-called. super massive black holes, have far higher masses of more than a million

. They were first predicted to explain the high energy output of quasars and active galaxies. Here, too, it is assumed that matter is initially collected in an accretion disk and from there falls into the black hole. In addition, these black holes force the gas and the stars in their vicinity to rotate at high speed around the center of mass, so that the presence of a black hole can be deduced from the rotation speed. Examples of such objects are the radio source Sagittarius A and the black hole discovered in 1997 with the Hubble Space Telescope in the center of the galaxy M84 (see Fig. 3).

Supermassive black holes have also been postulated to explain the flat rotation curves of galaxies. As a result, a few dozen black holes in the halo of galaxies would be sufficient, together with the stellar content of the halo, to cause the high rotational speeds in the outer regions of galaxies. Such black holes could also interact gravitationally with globular clusters and contribute to their dissolution over time.

The Annihilation Black holes can only be detected if it is possible to observe primordial holes, since the temperature is too low for holes that result from a gravitational collapse. Evidence possibilities concern the contribution of many primordial holes to the diffuse gamma background as well as the observation of a single evaporating hole. So far there are only upper bounds for this.

Black holes: Comparison of the laws of mechanics of black holes with the main laws of thermodynamics. 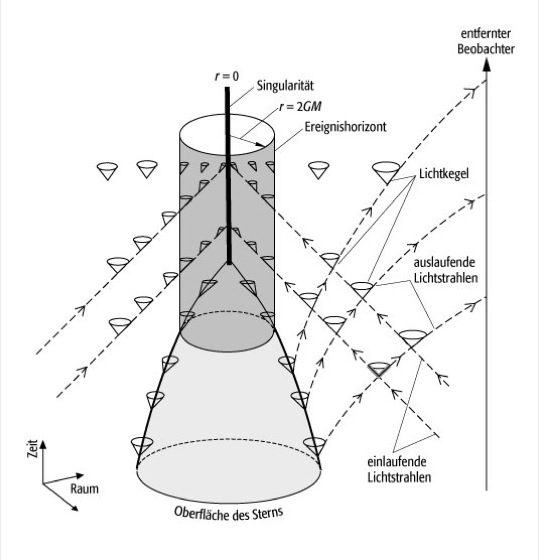 Black holes 1: Gravitational collapse of a star into a black hole. 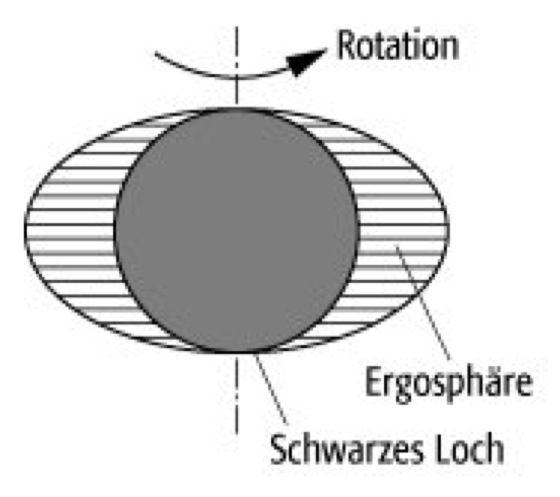 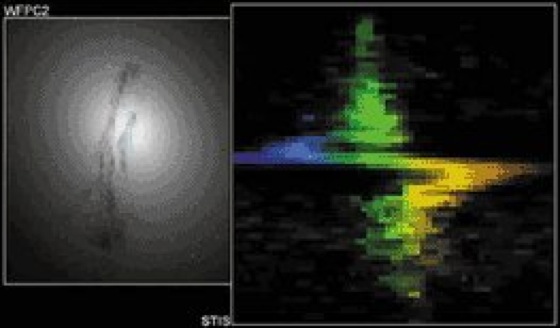 Black holes 3: Rotation speed in the center of the galaxy M84. The large blue- and red-shifted measured values ​​(left and right, respectively) indicate the presence of a black hole in M84. Without such an object, one would expect a roughly vertical line (source: Hubble Space Telescope, NASA, AURA / ST ScI). 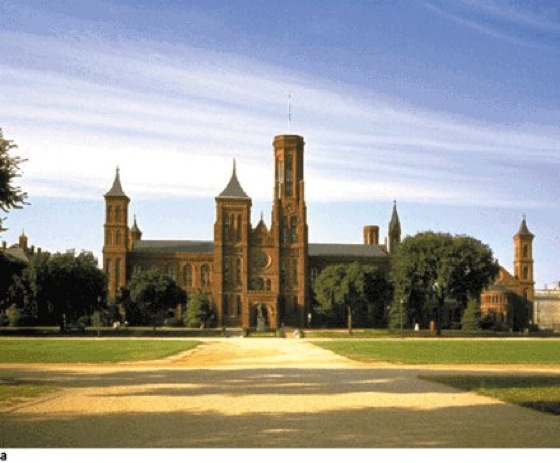 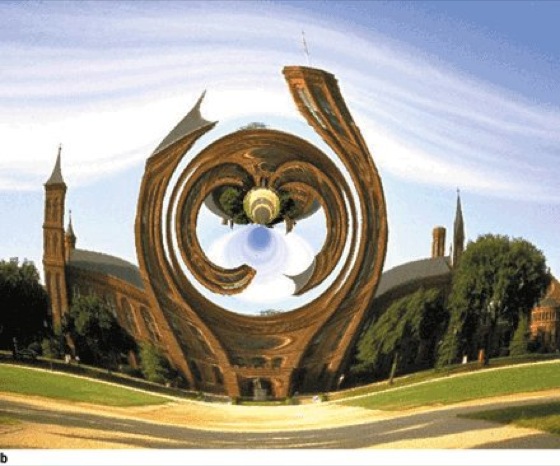 Black holes 4: Computer simulation of the influence of the curvature of space on a building (created at the University of Arizona).