What makes a person insensitive to hypnosis

When we talk about hypnosis, we usually mean one of the following two:

We can imagine this separation as follows: 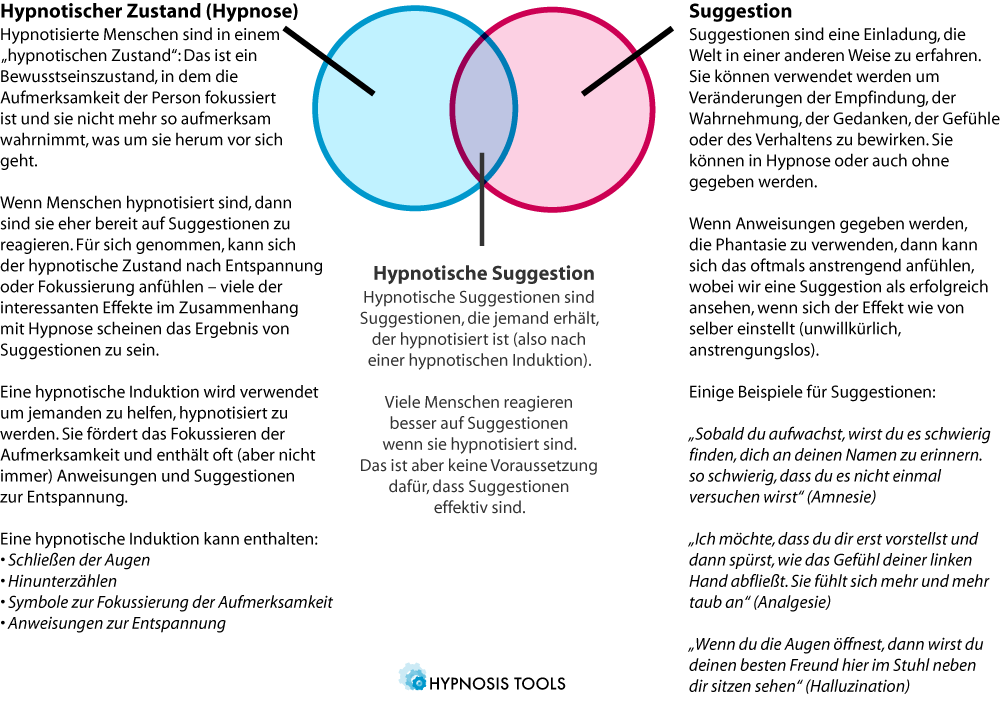 Illustration: The distinction between hypnotic "trance" and suggestion can be useful in understanding the effects of hypnosis

Hypnosis is a broad field that covers many individual areas. We'll start with a few simple definitions. Many of the quotes are hypnosis definitions from the American Psychological Society, APA. Their definitions are more than individual opinions about hypnosis, but rather correspondences of groups of scientists, based on the knowledge of over a century. Not all scientists agree with all parts of these definitions, but they are a good place to start.

"A state of consciousness with focused attention, reduced perception of the environment and increased capacity to react to suggestions." (APA, 2014)

One of the first things to know about hypnosis is that it affects our attention. Hypnotized people direct their attention wherever the hypnotist suggests. They hardly pay attention to what is going on around them unless they are instructed to do so. In a way, it is like getting lost in a good book or a movie - you are so captivated that you hardly notice what is going on around.

The second thing to know about hypnosis is that it alters the response to suggestions. A definition of suggestions is given below, but essentially they are invitations from the hypnotist to experience the world in a different way. For example, a dentist using hypnosis might suggest that the mouth feels comfortably numb. Or a therapist might suggest that the client is looking at traumatic memories without being overwhelmed by their feelings. Hypnosis typically means that suggestions are experienced more intensely and with less effort.

"While some people do not find it necessary to use the word hypnosis as part of induction, others see it as essential." (APA, 2003)

Hypnotic induction is an invitation to hypnotize and typically includes instructions and suggestions to help you achieve it. Often times it includes instructions for relaxation, which is pleasant but not absolutely necessary. For people inexperienced in hypnosis, the induction is usually a little longer, but with increasing experience they can reach the state of hypnosis much faster.

"The ability to experience suggested changes in physiology, sensations, feelings, thoughts or behavior during hypnosis." (APA, 2014)

The terms hypnotizability and suggestibility are often used interchangeably. Not everyone experiences the effects of suggestions in the same way. Some people experience them very easily, readily, and deeply ('easily' hypnotizable). Although they try, other people find it difficult to learn much about it ('weakly' hypnotizable). Most of them, however, are observed in between ('medium' can be hypnotized).

"The use of hypnosis in the treatment of a medical or psychological disorder or concern." (APA, 2014)

Hypnotherapy is the clinical use of hypnosis. Doctors, dentists, psychologists, nurses, and other health professionals use hypnosis to help their patients. Hypnosis is not really a therapy in itself, but rather a set of techniques that a trained therapist can use to offer help for change. Many experts expect basic medical or psychological training before using hypnosis - like a mechanic who should know how to fix a vehicle before using a wrench.

"One person is guided by another to respond to suggestions for changes in subjective experience, changes in perception, sensation, feelings, thoughts or behavior" (APA, 2003)

Suggestions lead to the most interesting effects in hypnosis. For example, if someone is hypnotized with a painful arm, they will likely feel focused and relaxed. It will not be up to the suggestion that the "Arm begins to feel numb and insensitive" take time to feel relief from the pain. This is also the case with other types of suggestion. Suggestions can be direct, as in the example above, or indirect, such as "You may notice how the feeling in your arm changes". One theory is that suggestions about changing our expectations of what will happen work and that we then have experiences in accordance with our expectations.

Not all hypnosis scientists agree on all aspects of hypnosis. Some scientists claim that hypnosis is an "altered state of consciousness" characterized by the way the brain works differently. Others believe that hypnotized people are themselves actively hypnotic cautious and not just reacting passively to suggestions. Therapists sometimes tell of how they use hypnosis to access the content and resources of the unconscious mind, while other scientists shy away from such language. Perhaps all of these explanations describe different parts of the overall hypnosis phenomenon.