What is important about the barbed wire 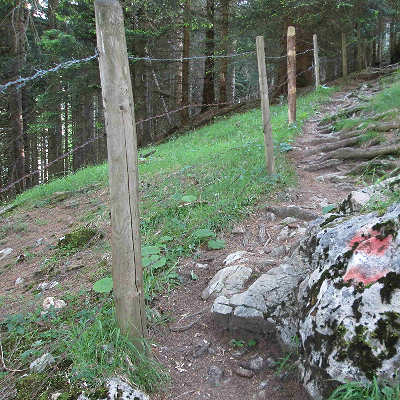 If you stumble over a root, you will find a secure hold on the barbed wire.
Ascent to the Großer Riesenkopf, 1336.8 m, municipality of Flintsbach.

K. Ministry of the Interior

It is forbidden to attach barbed wire in such a way that it endangers people walking on public paths, streets or squares.

If the police authority requests the removal or modification of a device made of barbed wire on the grounds that this endangers people who travel on public paths, streets or squares, this request must be complied with within the period specified by the authority.

Litigation among neighbors: barbed wire is allowed to stay

A homeowner doesn't need to take down a fence built with barbed wire and wood. More than three years ago, he and his neighbor declared in a court hearing that they did not want to change anything in the existing fortification system that had been in existence since 2001, the Munich District Court justified its judgment (Az .: 173 C 23153/06). The two married couples, who each live in half of a semi-detached house, had been fighting bitter arguments for years, which were also fought in criminal and civil courts. Conversely, anyone who argues with neighbors about everything possible for years creates trust that points that have not been objected to are in order. . Large parts of the fence were overgrown by the plaintiff's planting. Barbed wire contradicts the principles of normal dealings with one's fellow human beings. The aggressive and hostile character in itself forbids barbed wire unless there is a compelling reason to do so. Given that so many other things were argued, the defendants could rest assured that at least the fence would not be attacked. dpa
[Süddeutsche Zeitung, October 16, 2007; shortened. JH]

Landtag rejects a petition from a Munich resident. Barbed wire is still allowed

Anger at fences: A person from Munich wanted to have barbed wire fences built in Bavaria - in public spaces, on pastures, along the way and elsewhere. However, he failed with this demand in the petitions committee of the state parliament.
The man's argument: barbed wire does not suit the leisure society and is a danger to people and animals. The Pentent criticized the farmers in particular: They used barbed wire to keep people away.
The four political groups unanimously rejected the petition. The Ministry of the Interior is not enthusiastic when citizens fence themselves in with barbed wire, it said in a statement. But a ban is not legally possible. In addition, barbed wire could be quite useful - for example to safely fence cattle.
[Bavarian State Newspaper, February 11, 2014; according to DPA report; however, the DPA report probably continued:]

"And barbed wire can be forbidden in individual cases," said SPD MP Alexandra Hiersemann, who was the rapporteur responsible for the petition. As an example, she cited a barbed wire fence next to a playground.
[https://www.pnp.de/nachrichten/bayern/1207614_Stacheldraht-wird-nicht-verboten.html]