How can we avoid sharks in Hawaii

German dies after a shark attack off Hawaii

The young woman from Zierenberg in northern Hesse fought for her life in the hospital on the island of Maui for a week - but now she has died as a result of her serious injuries. "Jana fought hard for her life. We are very sad to announce that she lost this fight today," said a message from her family. "Jana was a very beautiful and strong young woman who always laughed and we will always remember her that way."

The 20-year-old was snorkeling about 50 meters off the coast of the Hawaiian island of Maui when the shark attacked. Alerted by their cries for help, both a pastor from California and her friends helped get the seriously injured victim out of the water.

In the past few days, the attending doctors described the condition of their patient as critical. Even when vital organs are not affected, shock and blood loss make shark attacks a deadly threat.

The beach called Palauea or White Rock Beach, popular with many holidaymakers, was closed for a good three kilometers and searched by boats and from the air. The rangers could not spot a shark.

Just one day before the attack on the German, a shark got stuck in a tourist's surfboard off Hawaii. Four days after the attack on the 20-year-old, a 16-year-old surfer was attacked by a shark on the east coast. The American suffered bite wounds on both legs and buttocks.

Don't swim in the twilight - no flashing jewelry

The Hawaiian authorities then issued guidebooks for tourists: "Do not swim at night or at dusk," it says, and "Do not go into the water with bleeding wounds!" You shouldn't wear flashing jewelry any more than high-contrast, bright swimwear. And: "If fish or turtles get restless, they go out of the water!" 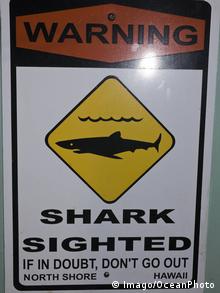 Warning signs have been put up at White Rock Beach

Shark attacks are rare, but occur again and again in "paradise", as the Americans call Hawaii. According to US media reports, there had not previously been a deadly shark attack in the region for almost ten years. This year, however, the authorities recorded eight attacks, four of them in the past few weeks off the island of Maui alone.

Marine biologists now want to research the movement of tiger sharks off Hawaii's coasts and in particular around Maui in a two-year project. Scientists speculate that a tiger shark could also have attacked the German vacationer. The biologist Carl Meyer, who is supposed to lead the study, explained that tiger sharks usually do not stay long in a region, can travel around 100 miles per day and also walk in shallow water.

Hawaii's DLNR chief environmental officer, William Aila, said: "There are huge differences in shark incidents. Every few years there is a small upward outlier. But what we are seeing now is an unprecedented outlier." But this can be observed not only in Hawaii, but worldwide.

Whoever goes into the sea, goes into the wilderness, said the head of the authorities. "Sharks play an important role in the ecosystem and the ocean is their home. The guests are us."