What is elastic and plastic deformation

The definition and description of the terms force, tension, elastic / plastic deformation etc. belong more to the area of ​​strength theory or mechanics. Since the topic is very closely linked to the field of materials technology, the most important basic knowledge is explained in this script.

First of all, the term voltage should be explained:
In mechanical engineering, components are usually exposed to mechanical stress, i.e. a force or torque. These forces create stresses in the component (or in the material). Tension means that a certain force acts on a certain area.

The mechanical stress is thus defined as the force per area: δ = F / A

Since materials are not completely rigid, they are deformed under the action of stress. The deformation of a workpiece can occur, for example, in the form of compression, expansion, bending, twisting, etc. It always depends on the type of mechanical load how a component deforms.
As is known, the various materials can be deformed with varying degrees of difficulty or ease. And materials can react differently to loads.

For mechanical engineering and especially in the field of materials technology, it is very important to distinguish between elastic and plastic deformation. The following is the most important information about these two types of deformation.

We speak of elastic deformation when a material or a component returns to its original state after a load. This means that the elastic deformation persists over the time in which a corresponding load acts.
As long as the load is not great enough to cause atomic migration, it remains a purely elastic deformation. The lattice of the metal is deformed (e.g. compressed, stretched, etc.), but then all atoms move back to their original position. Components should only be loaded to such an extent that there is elastic deformation. Hooke's law describes how to calculate the deformation under a load.

In the following picture the process of elastic deformation is shown again schematically. 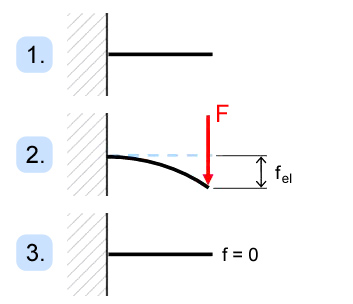 In the following picture the process of plastic deformation is shown again schematically.