Auma Obama: "It is up to you to improve your life"

Auma Obama and her half-brother, the former US President Barack Obama, at the opening of the new sports, resource and training center of the "Sauti Kuu" foundation in summer 2018

With her foundation “Sauti Kuu”, Auma Obama supports children and young people in her home country Kenya. The Germany alumna is convinced that everyone can take their life into their own hands - with the right support.

She avoids the limelight. Dr. Above all, Auma Obama wants to achieve something - not for himself, but for others. Their goal: to give as many people as possible a key that fits all doors that may close to them in life. "I have always been concerned with the question of how you can show people that they can always find a way out despite all adversities," says the German studies scholar and sociologist. She was born in 1960 in a village in southwest Kenya. The fact that she made her way to the world's metropolises from there has shaped her approach to life. "It is up to everyone to cope with and improve their lives," emphasizes Obama. "Others can only provide support." 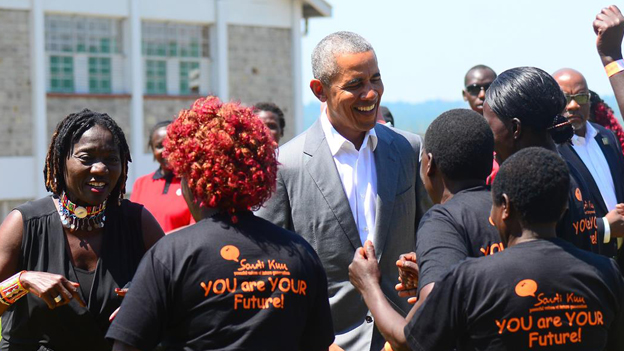 Auma Obama: "Our voices are strong when we speak out"

She herself made a lot of the support she received: thanks to a DAAD scholarship, she was able to study German in Heidelberg from 1980 onwards and graduated with a master's degree. Another DAAD scholarship enabled her to do a doctorate at the University of Bayreuth, she wrote about the conception of work in German and Kenyan literature and culture. Auma Obama then lived in Germany for a few years and moved to Great Britain for personal reasons in the mid-1990s. She later returned to Kenya, where she initially worked for an international aid organization.

“There is no longer an excuse for ignorance!” Said Germany alumna Auma Obama at the Global Media Forum 2014 in Bonn. She sees the digitalization of the media as a great development opportunity, but pointed out that participation also entails responsibility.

Passing on what she has learned

What she brought with her from Europe was much more than education and titles. "I took away the awareness that my voice counted something and was and is strong." That is the core of the message that she wants to give to young, previously disadvantaged people in Kenya and other African countries: Be proud and self-confident without being arrogant. Take your chances, they are in you. 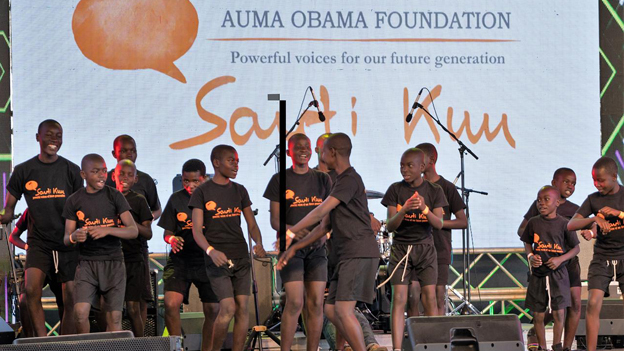 "You are your future" is the motto of the foundation that Auma Obama founded in Kenya and which has also been active in Germany since 2013. It is called "Sauti Kuu", Kiswahili for "strong voices". With her work in the foundation, the Germany alumna wants to pass on what she has learned herself. She was a quiet child, says Obama, and only gradually understood that she could make a difference by finding her voice and learning to speak out loud and use it. This applies to everyone, she says: “Our voices are strong when we speak out. And find others who - in the literal sense of the word - "tune in". "

Sport and education are the keys to this experience that Auma Obama had and that with “Sauti Kuu”, above all, disadvantaged children in rural Kenya would like to be conveyed to disadvantaged children. Opportunities are still rare there, and many people's lives are characterized by poverty. Young people often move to the cities and hope for a better future here. But many end up in one of the slums and lose sight of their goals. Obama is convinced that young people can also build a future in rural areas if they use their skills. "We are successful with our work because we do not relieve young people of the responsibility for improving their lives," she emphasizes. And most of them would have some idea of ​​the solution to their problems, just often not having the courage to implement them. Obama prefers to sum up what the foundation wants to show them in a succinct formula: "Use what you have to get what you need"!

Do something for yourself instead of remaining in poverty

In summer 2018, after a long construction period, Auma Obama opened a new sports, resource and training center in Alego in southwest Kenya. These include a soccer field, a vocational training center, an IT laboratory and a library. Her half-brother Barack Obama, the former US President, also attended the opening ceremony. This brought the new center a lot of media attention not only in Kenya but also internationally. "I do not accept the statement that we are poor," said Auma Obama at the opening of the center. Poverty is not an excuse to remain in misery and wait for others. Even those who feel poor can still do something for themselves instead of asking others for help.

With this, the Germany alumna describes her basic attitude towards life and at the same time outlines the prospects that are open to people in the country. You start by looking down, literally at the ground: in many regions of Kenya the soil is fertile, and if properly cultivated, it enables a good income. In the workshops and centers of the “Sauti Kuu” foundation, even small children learn how to enjoy working in the field. Not least because of the animals that are entrusted to them. Whatever fruit and vegetables they harvest, the children and young people can sell - and use it to pay their school fees, for example. In addition to farming techniques, they also learn that they can help themselves. This is the best foundation you can lay for your own future: a key that fits on all doors.

Auma Obama's portrait was first published on the Alumniportal Deutschland in German and English.